A cardinal crashed into our storm door a few evenings ago. Birds occasionally fly into our bigger windows but we’ve never had one hit the front storm door. The front door is under the deck roof and the inner door was closed, so the door did not look like an open passageway. The cardinal regained consciousness after a few minutes. It took another 10 minutes for the cardinal to shake off the fog, but it eventually seemed alert and oriented and flew away.

The feeders in our yard are usually very busy. I have to replenish seed every day and a block of suet only last 2 days at the most. As we watched the cardinal recover we noticed that there were no birds at the feeders. A little investigation showed what was going on—a hawk had come into the yard.

The dazed cardinal must have been beating a panicked retreat when it crashed into the door.

The hawk was perched on the edge of one of the water tubs we leave out for the deer and other animals. It’s been over a month since we’ve had a decent rain and the tub was an attractive spot for a break.

The hawk stayed for about 15 minutes, drinking, splashing, and generally enjoying itself. We think it was a Cooper’s Hawk based on markings, behavior, and typical habitat, but we aren’t sure. Cooper’s Hawks do hunt and live in wooded areas and our yard is a thick grove of oak and cedar (actually Ashe Juniper, but called cedar around here) trees.

After enjoying a break the hawk flew away and we haven’t seen it since. Much to the delight of our resident feeder birds, I’m sure. 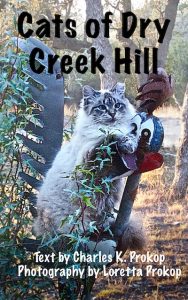